"Spring Break?", she asked as my four children bounced around excitedly in the grocery check out isle beside me as I paid for our lunch. I looked around at several faces while we were there in the middle of the morning on a school day. I was greeted with smiles from most, a tilt of the eyebrow from a few, and one audible giggle from a lady as she watched my crew with delight.
"No",  I replied simply.
But as I thought back to those kind glances my way, I braved up and said after a few awkward seconds of silence....
"We homeschool."
I had said it. It was there in that space. Out there for judgment- good, bad, or indifferent. I still don't like to say it. I share online about it in almost obnoxious amounts because I've always been a writer at heart. I share my words when I don't have them in person. I connect through them. With each crafted sentence, you get a peek into our lives. In person, though? I don't know. I like to keep to myself.
The gal ringing me up responded sweetly, chatting with my children and saying the phrase I often hear as I leave the walls of my home with four kids in tow: "You've got your hands full!" It doesn't bother me as it does some. I do have my hands full. Whatever ill feeling I expected to have at the mention of our little secret quickly eroded away as my oldest piped up that we go to school everywhere. He smiled as he said it, almost triumphantly. Meanwhile, Abel was telling her how old they all were, but he couldn't leave out me and the ages of all the grandparents. Saylor was talking to her about the hike we were about to go on and Merit was making a case of how he should get a piece of candy from those pesky exit isles.

Nope. I didn't worry about their socialization today. I think they're doing just fine.

Perhaps, personal hygiene is an issue to address, though... 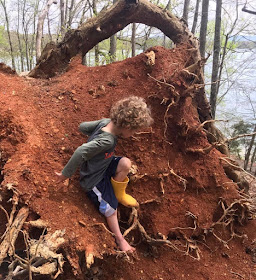